It has been some time since the last post.  Here we are in the middle of a very DRY “dry season” here in the upper Huallaga River watershed.  We have had very little rain the past two months.  Thankfully, the creeks are still flowing, though flow levels are diminishing.  You can read a recent article in the Washington Post about how things are shaping up in Amazonia this winter

The other big news is that the access road has been repaved with gravel and widened.  This situation obviously has its benefits (accessibility) and problems, mainly illegal selective logging in the upper watershed.  The local community would benefit, however, by doing what is necessary to protect the primary forests in the upper reaches of the watershed.  These forests provide vital ecosystem services for us all downstream, in addition to maintaining water quality, healthy micro-climate, and biodiverse flora + fauna upstream.  If this winter is any indicator of things to come, we must do what is necessary asap to prepare for future climatic shocks and extreme weather.

The agroforestry system at Isulawasi continues to mature despite my occassional tinkering by planting and/or opening up the system to allow more sunlight in.  I have been integrating more B. caapi vines and P. viridis plants into the system as well as in the upland secondary forest.  I hope to brew my second batch of ayahuasca in the coming weeks.  The first was made earlier this year with cuttings from a segment of 5 year old vine that toppled a thick hardwood branch.  That d’vine decoction was vine only and potent.  There were plenty of cuttings for the nursery which I will plant out as soon as we get some rain.  The young vine cuttings seem to do best in morning shade/afternoon sun around forest canopy openings.  Lately, I have been introducing them into the agroforestry system, planting them at the base of maturing fruit trees and hardwoods.  Anyways, the next brew will be a classic B. caapi and P. viridis admixture.  My P. viridis shrubs continue to mature having planted the first clones from leaf cuttings back in 2011-2012.  I have planted to date some 20-30 specimens.  I will plant more since there is space in the agroforestry system.  They definitely prefer the shadier parts of the forest garden, but with some hours of sun.  Also, we are in the midst of a dwindling cacao harvest season.  In total for this season, we have harvested close to 200 kg. (dried).  The harvesting will continue this upcoming week.  There is definitely lots of work to be done before the start of the “wet” season.  Onward!! 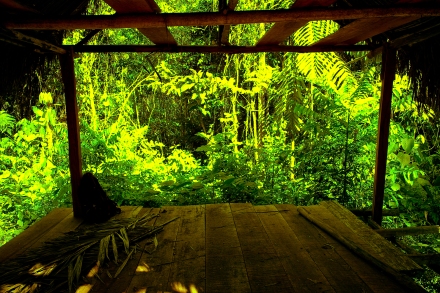 What does it mean to live and work day to day in a tropical rainforest? Obviously if you’ve lived in urban contexts your whole life there will be a tremendous amount of new knowledge to acquire. Much of this knowledge would pertain to day-to-day “mundane” activities like preparing food, taking a bath, sleeping well, washing clothes, etc. However, to me, I choose not to distinguish between the mundane and non-mundane. We are beings living in a very mysterious i.e. spiritual context, having a “human experience.”  In other words, all activity in my mind IS “spiritual” activity.

Hence, the phrase “forest gnosis.” Living in the wild forest is like living in a whole other world-an enigmatic matrix of zillions of interconnected multi-dimensional beings in the air, vegetation, water, soils, my body! Sure, I have access to many modern amenities like a motorcycle, clothing, sunhat, boots, backpack, machete, plastic bottles + bags, etc. However, it is possible to do away with most of these things and learn to live in the forest on its terms. Here at Isulawasi that would mean, for example, identifying and learning the habits of dozens of animal species, hunting-gathering-growing food, learning how to make use of dozens of useful plants-trees-vines-fungi, learning to make simple dwellings out of found material, and make fire with dry wood for starters. Ok, we wouldn’t have to go that far, but it certainly makes for an interesting “stoic” experiment. Anyhow, there are still many things one who lives and works in the forest ought to know.

One thing for folks that do any kind of wild forest gardening or horticulture in the Amazon is learning about the habits of 5 or 6 common wasp species. There are some wasps like “shiri shiri” that love to nest on the rafters and beams of wood dwellings and are moderately aggressive when molested. Then there are two species of “carachupa” that like to nest in trees including cacao and are very aggressive. I have learned to distinguish between the different wasp species by nest type, aggression level, habitat, and potency of sting. This “gnosis” definitely comes in handy to avoid pissing them off and, in turn, getting badly stung. Then again, the locals consider wasp stings and the like medicinal!  So, at this level, it is essential to get to know who you are living amongst and the habits of these beings. 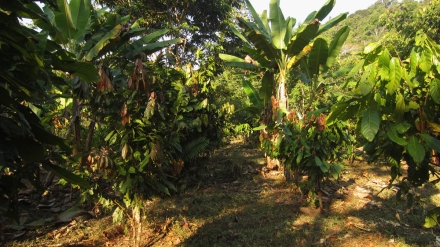 Firstly, brief status update. As of August 2013, “Isulawasi” (18.4 hectares) has been registered in the region of San Martin as a rural landholding reserved for agriculture (predio rural).

The first half of 2014 has given Isulawasi it’s first cacao harvest. Although, the yield is tiny, it is a good sign, and gives me more motivation to “baby” my cacao trees for harvests to come. I must obviously plant another 100-200 Theobroma trees. I want to be able to produce at least 1000 kg of properly cured and dried cacao beans. I’m not sure this is feasible by next year, but I am going to give it a go. There is nothing like starting slow, learning the ropes, and expanding as necessary.

Of course, the focus has been on the cacao orchard since this is my best shot at a steady future income. I am learning as much as I can about Theobromas, the local forest ecology, watershed, and bioregion from protracted and thoughtful observation, the local inhabitants, the web, and my fantastic library.  I am focusing most of my energy on the cacao agroforest, forest garden, and homegarden.  However, the “sweet spot” where ecological and economic overlap with my personal integrity still eludes me. I must find a way to generate a steady income stream while leaving most of the forest to regenerate itself within my light plantings. In other words, discover a path to right livelihood working in cooperation with the forest and all its inhabitants.  I guess in Permaculture parlance, we are keeping a steady eye on “people care” and “fair share” always nested within “earth care.”

One of the Banisteriopsis caapi vines getting thicker and growing further up into the canopy.

My young caapi vine reaching out as she climbs up and up seeking the light.

I’ve been wondering lately. How is it that I have been sloshing on this muddy path?  Almost everyday I wake up at 6am, and after my morning essentials I am off to the garden!  My forest/garden/orchard, “Isulawasi,” is named after a famous and plentiful insect, the giant bullet ant (Paraponera sp).  “Wasi” means house or place in Quechua.  So, to House of the “Isula” I go to work and play.

I arrived in Peru in the beginning of 2009.  I had recently been laid off from my position at the local watershed council and was up for a change. Given that I have roots in Peru, it seemed like the right choice coming over here to visit family, travel a bit, and contemplate my next move.  It did not occur to me at the time to live here, although I was open to the possibility and rather fed up with the political and economic situation back home. 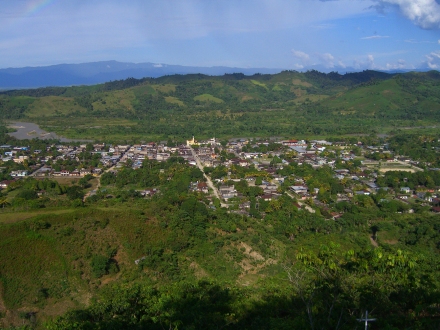 View of Uchiza from Serra Campana

My real adventures began when I arrived in Uchiza, a small town with a tainted history on the lower slopes of the tropical Andes. Little did I know what would wait in store.  Gradually, I left the big city comforts of Lima smitten with this small unpretentious jungle town.  As a matter of fact, by the time I had arrived in Uchiza, all the creature comforts i.e. internet, cable TV, cellphones had already been there for a few years!  So, I thought I would have the best of both worlds- rural tropical paradise AND civilization.

As I began to spend more time in Uchiza becoming familiar with my family roots and exploring the region, I began to think about how I could apply what I learned in my Permaculture design courses here.  Maybe, acquire a small piece of land and “develop” it in an ecologically “regenerative” way.  I knew that it would be difficult back home given my economic reality.

When the opportunity arose to purchase a rural property, I jumped on it.  First off, the price per hectare was unbelievably cheap.  The property itself was a bit remote and wild, but accessible (via trail) with several spring fed creeks, secondary, and primary forest near a small montane river.  More than half was suitable for small scale horticulture/agriculture and the rest for reforestation/ecological restoration. 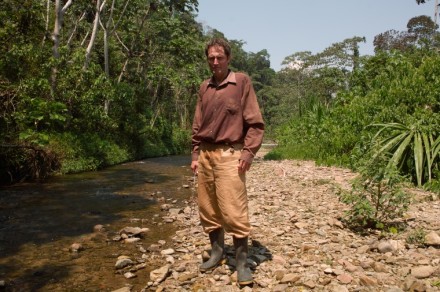 I quickly closed the deal on 18 hectares, but had to settle without a land title for the time being.  In fact, few folks, I’d been told, possessed legitimate titles.  Also, most folks were waiting for the state to issue titles.  So, I had to wait and learn.  Patience became something to be practiced daily. 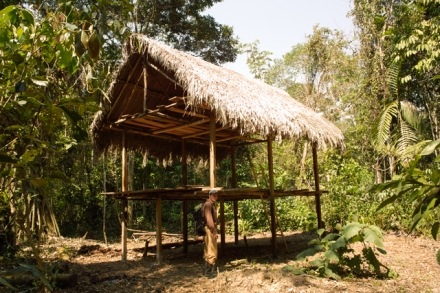 Greetings!  This blog documents my thoughts and experiences as I grow and evolve at Isulawasi.  I hope you enjoy it, always learn something, and find a little inspiration, too!